New DOL rule seen as next step toward open MEPs

New DOL rule seen as next step toward open MEPs 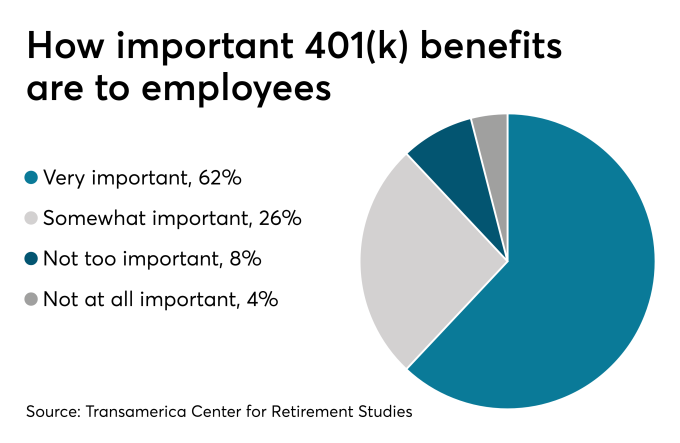 When the Department of Labor issued its final rule to expand access group retirement plans, it moved a step closer to what for many in the benefits industry is the ultimate dream: unfettered access to multiple employer plans.

On Monday, the DOL announced it will relax the regulations governing which employers can band together to offer a collective plan, and also issued a call for comments that could inform a new rulemaking procedure that would advance open MEPs.

Under the new rule, which takes effect Sept. 30, businesses will be permitted to join together with other firms that operate in their states or in the same metropolitan area to form an association retirement plan. Under the old rules, participation in those plans was limited to firms that operated in similar industries or trades.

“Many small businesses would like to offer retirement benefits to their employees, but are discouraged by the cost and complexity of running their own plans,” acting Labor Secretary Patrick Pizzella said in a statement announcing the new rules.

Indeed, the promise of MEPs is to help small businesses extend retirement benefits to their workers on more favorable terms than they would be able to obtain from a plan if they were shopping on their own. Likewise, for firms that don’t have a full-time, in-house benefits professional, the MEP sponsor takes on much of the administrative burden and fiduciary liabilities that come with running a retirement plan.

“I think the benefit to a small employer is you’ve got a group of professionals that run the plan rather than having that fall back on the employer. In some cases, you can achieve economies of scale,” said Michael Kreps, a principal at the Groom Law Group whose practice focuses on retirement plans and fiduciary responsibility.

“From an employer perspective, you offload a significant amount of operating responsibility for the plan,” Kreps said.

The DOL’s action comes as the latest effort to address the challenge of getting more Americans to save for retirement. Thirty-eight million private-sector workers don’t have access to a plan through their employer, according to figures from the Bureau of Labor Statistics, and the contrast in access between small and large firms is stark. According to BLS data, 85% of workers at businesses with 100 or more employees have access to a workplace retirement plan. At businesses with fewer than 100 employees, that figure drops to 53%.

The DOL’s new rule is only an incremental move toward open MEPs. After all, firms in unrelated fields that are not in the same geographic area will still be prohibited from joining together in a plan under the nexus requirement.

However, in announcing the rule, the department also issued a request for information on the prospecting of authorizing open MEPs, including its own legal authority do so.

“They’re gathering the opinions of the heavy hitters in the industry [and] trying to figure out if it’s permitted,” said Nasrin Mazooji, vice president of compliance and regulatory affairs at Ubiquity Retirement and Savings, a 401(k) provider catering to small businesses.

In its request for information, the DOL noted that the comments it received on the rule issued Monday were broadly supportive of the open MEP concept, and indicated that it could pursue further rulemaking to facilitate those types of plans.

“After reviewing the comments, the department is persuaded that open MEPs deserve
further consideration,” the DOL said.

Among the questions the department is asking in its request for information is whether financial services firms such as banks, broker-dealers and insurance companies should be authorized to provide open MEPs. The DOL is accepting comments on open MEPs through October.

In the meantime, the landscape could change considerably.

Broad industry support for open MEPs and the backing of groups like the AARP has encouraged lawmakers to address the issue, with bipartisan bills from the House and Senate pending that would erase much of the nexus barrier under current DOL policy.

“I’ve been working on MEP legislation for a decade now,” Kreps said. “Everyone thinks it should be done.”

He is hopeful that Congress this fall will approve some reconciled version of the SECURE Act, which the House passed in May by a 417-3 vote, and the Retirement Enhancement and Savings Act, which is pending in the Senate. A likely path forward for the bills would be to fold them into must-pass appropriation legislation lawmakers will take up later this year.

Both bills would authorize open MEPs, and both are backed by groups that are not commonly aligned on other policy issues.

David Certner, AARP’s legislative policy director, lauded the SECURE Act in an email for provisions that would “provide further clarification on MEPs, as well as require coverage for part-time workers.” AARP has endorsed the bill.

The view is similar at the National Association of Insurance and Financial Advisors. “[W]e remain committed to getting the SECURE Act passed and signed into law for the benefit of all small businesses that want to provide retirement benefits but are unable due to costs and complexities that an open MEP could resolve,” Kevin Mayeux, NAIFA’s CEO, wrote in an email.

If the SECURE Act were to become the law of the land, it “would probably negate the need for what [the DOL is] considering doing through the RFI in large part,” Kreps said.

Much as she favors open MEPs, Mazooji cautions that they are not for everyone.

By their nature, MEPs don’t tend to offer individual participants the same ability to customize the terms of the plan or its investment strategy that firms enjoy when they go shopping for a plan on their own. MEPs tend to be less “personalized,” Mazooji said, and can also be more difficult to leave in the event that a participant is dissatisfied with the plan.

Likewise, arranging with a sponsor to oversee a plan does not absolve the small business of its due diligence and fiduciary responsibilities under the Employee Retirement Income Security Act.

“They’re not absolved by any means,” she said. “It’s more of a co-fiduciary role that the MEP provider will take. What will happen is they will take over almost the entirety of the administrative function.”

But the DOL and IRS will still expect MEP participants to keep an eye on their plan providers to ensure they are performing their administrative functions such as filing their annual 5500 forms. Mazooji suggests documenting that oversight with a compliance checklist that the firm could present to regulators in the event of an audit.

“They don’t necessarily have to be a benefits professional,” said Kreps, “but they do have some responsibility for selecting and monitoring who is a good choice.”

MEPs can also run into trouble if a single participant is out of compliance with the IRS regulations that provide the plans with a favorable tax status. The IRS has a proposal to tackle that “one bad apple” problem, as it is known, and the legislation pending in Congress would address the issue, as well.

If lawmakers and regulators can create a more favorable environment for open MEPs, Mazooji expects that they will flourish and, indeed, become a central element of the retirement landscape.

She sees MEPs as bringing to retirement plans the kind of one-click shopping that is of a piece with consumers’ expectations for service delivery in any number of other areas.

“We’re kind of losing this personalized touch throughout this industry, and what people are going for is effortless sign-ups,” Mazooji said. “Plan design is no longer a really big conversation that we need to have.”

And open MEPs seem tailor-made for those shifting appetites, she argues.

“I think MEPs will become the way of the future for this industry,” Mazooji said. “By 2022, we might be looking at a very different industry.”