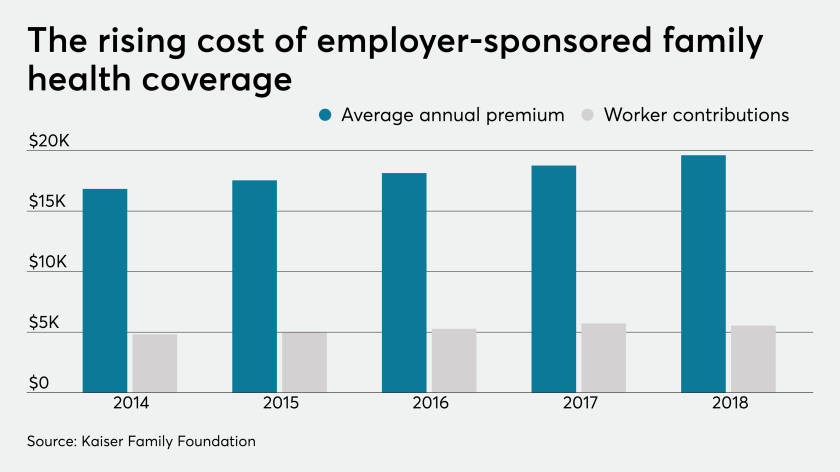 Like a significant chunk of American voters, a majority of large employers want to expand Medicare. Just not too much.

A new survey of 147 large employers from the National Business Group on Health found that 55% of them support a Medicare expansion that’s limited to older Americans. Only 23% think eligibility should drop to age 50, however, and 45% don’t think it should expand at all. A majority believe that a broader “Medicare for All” plan would increase health costs.

The same survey also highlights why employers should consider coming around on health reform that reduces their role in the system. The growth in health costs has outpaced inflation and wage growth for years, and the surveyed businesses expect it to rise 5% to $15,375 for each employee next year.

About 70% of those costs will fall on the companies, which plan to try everything from boosting virtual health services to investing in health concierges to rein them in, according to the survey.

History suggests that their best efforts might not amount to much.

Employer-sponsored insurance is America’s single largest source of health coverage. That’s mostly true because the IRS exempted employer health benefits from taxes in 1943, a move that created the federal government’s single biggest tax expenditure. Large companies derive some benefit from the current system because they can provide a significant tax-free benefit that helps them compete for talent and pay people less. But it comes with significant drawbacks. Employers have to devote substantial resources to providing healthcare and controlling costs. Many of them have no particular expertise or advantage in doing so.

The results are mixed. Yes, individuals with private insurance are generally satisfied with the quality of their coverage. They’re not nearly as happy about the cost as deductibles rise. The U.S. pays more than any other developed country for healthcare and medicines and receives worse results on a variety of metrics.

Employers pay particularly high prices and spend heavily on plans that have higher overhead than public alternatives. A recent RAND study found that employer-sponsored plans paid hospitals at 241% of Medicare rates in 2017. Employers are already effectively subsidizing public programs, not to mention the profitability of insurers, health care providers and drugmakers.

It’s not entirely their fault. The American system inherently fragments negotiating power, which gives providers a significant advantage and makes it difficult for even the largest employers to get a good deal. Turning a larger piece of healthcare over to the government would free companies to focus more time and resources on their actual business instead of on navigating the world’s most expensive and convoluted healthcare market.

Big businesses most likely fear big Medicare expansion in large part because it would lead to a significant tax increase. But looking at any tax increase as an enemy is a mistake. Those taxes represent a trade-off; they would replace some or all of the billions of dollars that employers are currently spending on care. Depending on what taxes are imposed and whether the public plan is able to control costs better than the current system — and it could hardly do worse — many employers could come out ahead.

There are a lot of unknowns when it comes to Medicare for All and plans that move the country in that direction. Employers are right to be skeptical until they know more, but the results could well shake out in their favor, and they shouldn’t be so quick to discount the approach.