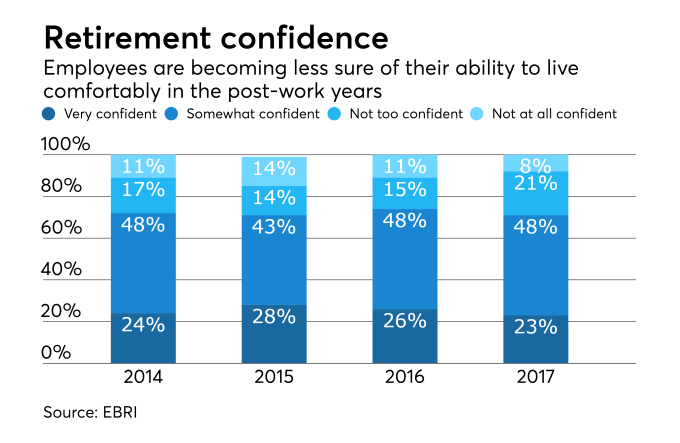 Plan sponsors who have written off the defined benefit plan as a relic of the past may want to reconsider. While the number of participants in DB plans has declined somewhat in recent years, the number of DB plans has been rising.

Specifically, the number of single-employer DB plans with fewer than 100 participants rose for the third consecutive year in 2015, up 2% from 2012, according to recently published data from the Department of Labor’s Employee Benefits Security Administration. The growth rate was more robust among plans with at least 100 participants, rising by 4% with four consecutive years of growth. Total participant head count for single employer DB plans stood at around 270,000 in 2015, per the EBSA data.

Although defined contribution plans have also been growing over the same period, and their total numbers dwarf the DB market, the number of DC plans hasn’t been growing any more rapidly.

One reason, says John Lowell, a partner with the October Three actuarial consulting firm, is that the rate of DB plan termination has slowed. “A lot of the larger plans have been doing risk transfers to insurance companies,” he explains.

By shifting funding liability to carriers, sponsors haven’t felt the urgency to pull the plug on those plans. With fewer terminations to statistically offset the creation of new DB plans, the result is net growth for the category.

Another factor that comes into play, Lowell says, is increased regulatory relief for stressed DB sponsors. This too has eased any pressure to terminate those plans.

Yet another contributor to the uptick in DB plan sponsorship is a delayed effect of the Pension Protection Act enacted a dozen years ago. Cash balance plans, a DB hybrid design, were allowed to credit participants’ notional accounts based on investment returns actually achieved by the underlying pension portfolio. That change removed an element of risk for cash balance plan sponsors, says Lowell.

Contribution limits for conventional DB plans are based on the dollars required to fund the highest allowable pension benefit at retirement. That means, for example, that a 50-year-old who could afford it might be able to put $147,000 aside in a DB plan in one year. Even a 40-year-old could set aside approximately $88,000, by Lowell’s calculations.

When employers have both a DB and a DC plan, the opportunities for owners and executives to set aside tax-deferred funds are even greater. And as long as contributions of 7.5% of compensation are made on behalf of lower paid employees, “you don’t need to worry about ERISA anti-discrimination tests,” Lowell says.

Independent pension consultant Robert Lawton reports that small profitable companies with small ownership groups often turn to DB plans as a source of tax deductions, as much as a vehicle for retirement funding. This often occurs after they have already contributed the maximum allowable amounts to a DC plan. Medical practices and law firms, for example, are often good candidates for a DB plan.

One knock on DB plans is that they are more expensive to set up and administer than 401(k) plans. For that reason, Lawton only encourages companies whose key executives plan to stay together for a relatively long period of time to consider a DB.

Some DB plan sponsors incur greater costs than they need to. Specifically, Pension Benefit Guaranty Corp. premiums–often the highest administrative cost of a DB plan — can avoid being required to pay variable risk-based premiums and pay lower fixed PBGC premiums instead. A study by October Three outlined a number of “best practices” DB plan sponsors can adopt to reduce their PBGC premium and tax burdens.

“The PBGC premium burden remains a major threat to effective pension management,” the report states. Other tactics, such as making funding contributions by Sept. 15 to generate tax savings that “can be worth almost four times as much as the premium savings themselves,” are also outlined in the report.

Headcount reduction and “split plan” strategies can also contribute substantial savings, the report states. Knowledge of such techniques, disseminated by advisers, could further contribute to the growth of DB plans.